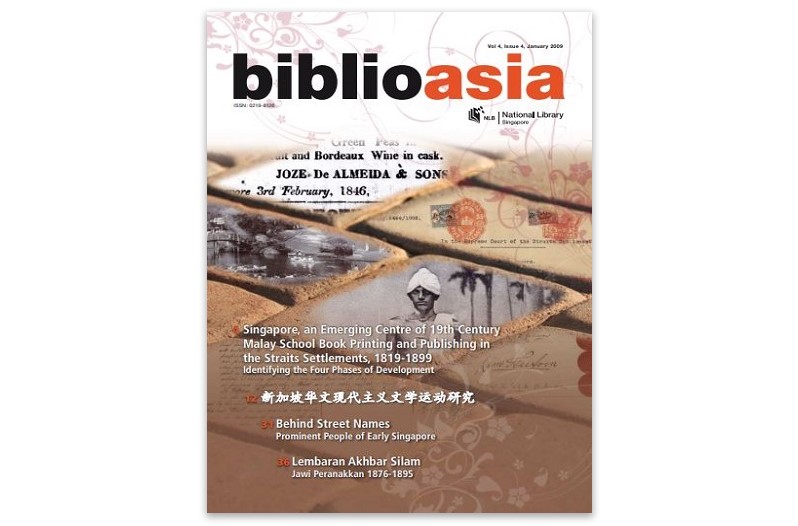 Singapore, an Emerging Centre of 19th Century Malay School Book Printing and Publishing in the Straits Settlements, 1819–1899: Identifying the Four Phases of Development
Historical events suggest that Singapore emerged as a centre of Malay school book production in the 19th century through four phases of development: (i) Establishment of the Mission Press and the first printing in Malay in 1822; (ii) Missionary printing and Malay classes at the Singapore Institution (1817–46); (iii) Benjamin Peach Keasberry as the first official translator and printer of Malay school books (1847–75); and (iv) The Straits Settlements under the Colonial Office and the Government Malay Press (1885–99).(PDF)

A Glimpse of his Past: Yeo Chan Boon (1881–1967)
Yeo Guan Nor tells the story of her late grandfather, Yeo Chan Boon, who was born in China in 1881 but came to Singapore when he was 18. He later became one of the founding members of the Singapore branch of the Revolutionary Alliance (Tongmenghui) founded by Dr Sun Yat-sen. (PDF)

Behind Street Names: Prominent People of Early Singapore – Some Perspectives from the Koh Seow Chuan Collection
In colonial Singapore, streets were commonly named after prominent people, usually as a mark of appreciation for their contributions or services rendered to the community, society or state. The Koh Seow Chuan Collection is a valuable resource for historical and social research on Singapore. (PDF)

Lembaran Akhbar Silam: Jawi Peranakkan, 1876–1895
Highlights some of the earliest surviving issues of the first Malay newspaper, the Jawi Peranakkan, published between 1876 and 1895. The newspaper was financed, run and edited by a group of Jawi Peranakkan (local born Indian Muslims). (PDF)

苏州工业园区图书馆参观访问记
Since its inception in 1994, the Suzhou Industrial Park has evolved into the largest economic cooperation project between China and Singapore. Three librarians from the Lee Kong Chian Reference Library visited the Suzhou Dushu Lake Library in October 2008. (PDF)