From Garden City to Gardening City

Oriental, Utai, Mexican: The Story of the Singapore Jewish Community

The Invention of a Tradition: Indo Saracenic Domes on Mosques in Singapore

Icons of Learning: The Redesign of the Modern Library

An introduction to Design, Aesthetics and Ethics of the Built Environment

Writing to Print: The Shifting Roles of Malay Scribes in the 19th Century

“A prominent expert and activist of the Malay language, literature and culture who never stops writing and imparting his knowledge” — This succinctly sums up Haji Muhammad Ariff Ahmad, better known by his pen name MAS. Muhammad Ariff has many pseudonyms of which MAS is most recognisable to him. MAS stands for Muhammad Ariff Singapura (Muhammad Ariff of Singapore), an apt moniker as he has become the gold standard for his contributions to the Malay language, literature and culture. His other pen names include M. Arba, P.L. Rajaudang, M. Foerida, Mas Malaya, Mas Tanjung Malim, Mas S.P.10 and Minamoria.

Muhammad Ariff Bin Ahmad was born in Kampong Tiong, Singapore on 6th December 1924 at 25 Outram Road. The second of four children, Ariff lived in different parts of Singapore, including Newton Road, Dunearn Road, Tiong Bahru and Henderson Road. In the day he sold cakes made by his mother, a housewife; and every evening his father would teach him to read the Quran.

At school, Muhammad Ariff loved reading and took part in many writing competitions. He also wrote for his school’s Scouts magazine and dreamt of becoming a full-time writer. Despite being equally good at drawing, Muhammad Ariff chose to focus on writing.

After the Second World War, he studied at Sultan Idris Training College in Tanjung Malim, Perak, to fulfill his father’s wish for him to become a teacher. Fortunately, his career as a teacher allowed him to continue writing. Muhammad Ariff has written numerous books including short stories, non-fiction, children’s literature and school textbooks. He also contributes articles and essays to newspapers and magazines in Singapore and Malaysia. He has also written drama and documentary scripts for television and radio broadcasts.

Muhammad Ariff’s life saw a dramatic change in November 1933. One afternoon, when playing rounders (baseball) in a field along Malcolm Road and Chancery Lane, he was “caught” by a teacher from Sekolah Melayu Tanglin Besar (Tanglin Besar Malay School), who was furious to see him not in school.

Muhammad Ariff was immediately enrolled into primary 1 where he studied until primary 4 in 1937. However, Muhammad Ariff had to remain in primary 5 for three years at Sekolah Melayu Tanglin Tinggi (Tanglin Tinggi Malay School) from 1937 to 1940 because he was not yet 16 years old — the minimum age required to become a Malay teacher.

Muhammad Ariff became a trainee teacher in 1940 after completing his studies in the Malay school and was subsequently posted to Sekolah Melayu Tanglin Tinggi in 1941 when World War II broke out.

In 1942, Muhammad Ariff was called up by the Japanese to learn and teach the Japanese language in a public school. From 1943 to 1944, he taught Japanese in a special Nippon-Go class for teachers and became a Japanese language instructor in a language centre in Pearls Hill School for teachers. It was here that he realised his potential as an educator. His path towards formalising his teacher training came when the British returned to Singapore. Between 1946 to 1949, Muhammad Ariff attended formal Malay teacher training at Sultan Idris Teacher Training College (SITC) in Perak, Malaysia. 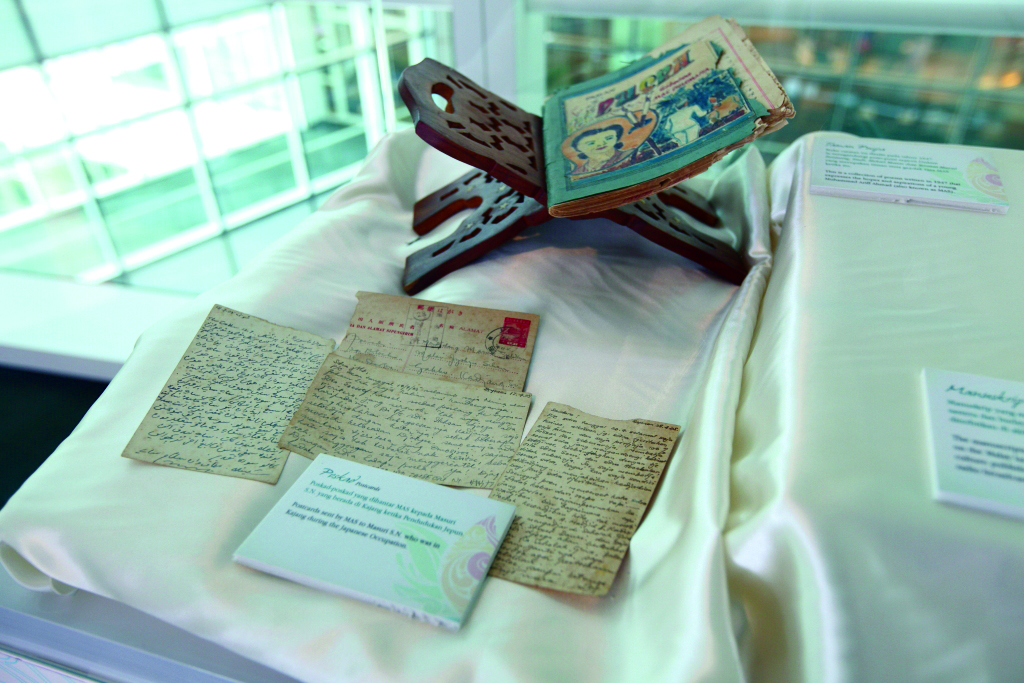 Taman Puspa is a collection of poems written in 1947 that expresses the hopes and aspirations of MAS. Post cards to Masuri S.N., who was in Kajang during the Japanese Occupation, were also featured.

It was in SITC that he became acquainted with many writers and activists all over Malaya. Many of them were later involved in Malaysian politics and curators of post-war literary developments.

Muhammad Ariff retired as a senior lecturer at the Institute of Education. After that he was appointed as the editor of the Malay edition of Grow magazine (Majalah Mekar) published by the Ministry of Education. Muhammad Ariff produced many school textbooks during his stints in SITC and IE and was behind the scheme of work for the teaching of Malay Language, Literature and Science in Malay language for Singapore schools.

He was also member of the Romanized Malay Spelling committee that developed the Singapore Malay language. In 1966 he organised the First Malay National Language Congress in Singapore.

Muhammad Ariff’s contributions as a teacher were not confined to the realm of education. As highlighted by Mr Guntor Sadali, former editor of Berita Harian/Berita Minggu, “Cikgu Ariff is a reference point of the community and he is ever ready with the answers when there are issues about the Malay Language.” Muhammad Ariff reached out to the community through his regular columns and broadcasted through the mainstream media.

Arts for the People

Muhammad Ariff is also one of the founding members of the Angkatan Sasterawan ’50 (ASAS ’50) a literary organisation that champions the rights of the community through the writings of its members. ASAS ’50 was established with the belief that “united we stand, divided we fall”. He commemorated the founding of ASAS’50 — 6 August 1950 — through his poem “Long-lived Unity”. 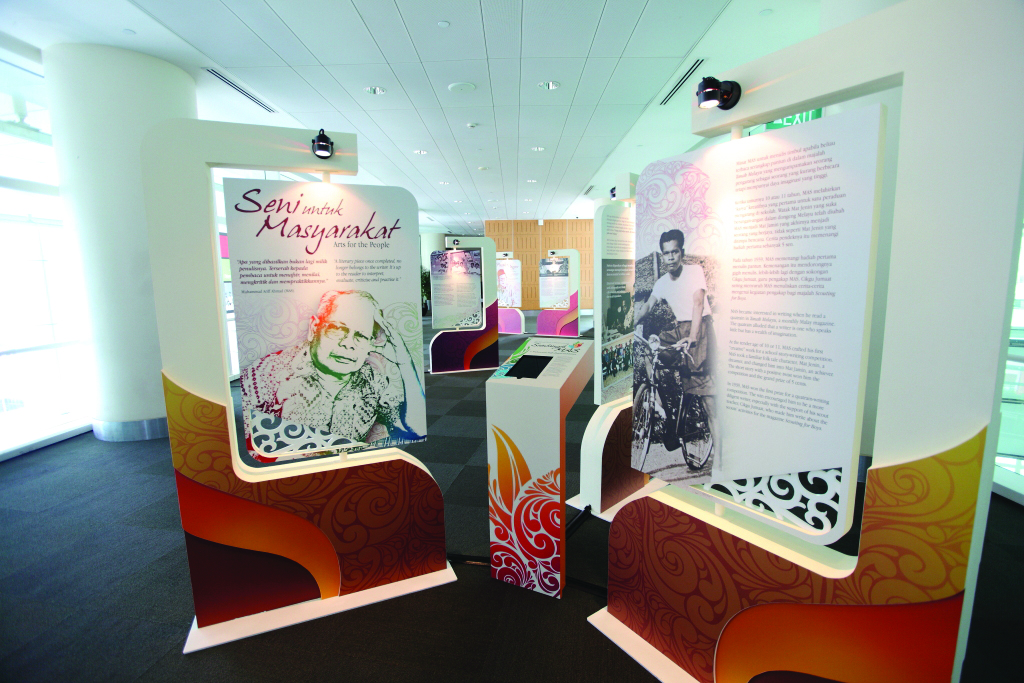 Muhammad Ariff’s first foray into creative writing was in the field of radio drama. During the Japanese Occupation, he produced drama scripts for radio broadcast. The drama series Oleh-Oleh Pembelaan Seorang Ibu and Inikah Balasanmu, based on his scripts, were broadcasted in 1943.

At the same time, he decided to record and report the cruelty of Japanese soldiers. However, his short stories such as Pokok Jarak (Barbados Nut) and Pondok Buruk (Old Hut) were rejected and not published because their anti-Japanese sentiments were exposed to strongly. Pak Sako (Dr Ishak Haji Muhammad), the writer for Semangat Asia, advised him to stop if he wished to stay alive.

Muhammad Ariff, together with other writer friends, was conscious of the potential of arts as an instrument to build a society that was facing an uncertain future after the Japanese Occupation. Literature became a platform to seek independence from colonisation and redress for social injustices. It also reflected the hope and ambition to achieve the common goal of attaining “full independence” through their literary works and through the concept of Arts for the masses.

In 1947, Muhammad Ariff completed his first novel Menyahut Seruan Ibunda (Answering the Call of Motherland). It was accepted for publication by Cikgu Harun Aminurrashid. However, it was published as a series in the magazine Mutiara.

Muhammad Ariff believes that writing is his responsibility, one that allows his fellow countrymen to view life positively and lead a meaningful existence. For instance, his novelette Sarah Pengarang Kechil, published in 1957, exemplified his concerns on the importance of education in order for the next generation to achieve success. The novelette was adopted as a textbook for Malay literature. The novel Mail Mau Kawin (Mail Wants to Wed), published in 1976, considers the issues of the Malay community at that time. The importance of lifelong learning was subtly touched on as one of the ways to overcome the vicious cycle of poverty. Another example is the poem “Is it true?”, which gave rise to controversy when it was published in Berita Harian in 1974.

Works by Muhammad Ariff Ahmad, such as Adam Kena Hujan, Suara Guru and Sarah Pengarang Kechil, were on display at the exhibition.

“Is It True” encouraged readers to reflect and compare Truth and Falsehood. It is a simple poem but has a very deep meaning. The poem was able to provoke readers to think about life via the beauty of poetry.

His works span almost 65 years of his life and comprise various themes that express his journey and struggles in the fields of literature, language and culture. At the same time, his poems serve as a documentation of our social memories.

Muhammad Ariff’s influence can also be seen in the fields of language and culture. He was appointed as the chairman of the Malay Literature Prize committee that formed to promote literature in Singapore. Initiated by ASAS ’50, it was supported by 18 other non-governmental organisations. Today the award is known as the Malay Literary Award under the purview of the Malay Language Council of Singapore.

Muhammad Ariff’s influence and high regard by the Malay Muslim community is illustrated by the numerous organisations he is a part of, such as the Association of Muslim Professionals and Malay Heritage Centre Foundation. The various awards and accolades bestowed upon him are testaments to a life dedicated to serving the community. Even though he is now in his late eighties, Muhammad Ariff is still sharing his knowledge, thoughts and ideas via a weekly newspaper column in Berita Harian. He is indeed an iconic national treasure that can never be replaced.

Muhammad Ariff’s many contributions to the community are a manifestation of his philosophy in life: “The life of a tree bears fruit; Let the life of humans be fruitful”. Despite all he has achieved, he still continues to share his knowledge, expertise and service as inscribed in the words of Kiayi (religious leader) in his poem “What will I become?”:

What should I become?
The Kiayi says: Be as complete as a
human can be
to the Creator, to others — have piety,
have compassion
so that you will get Allah’s blessings,
even the people will respect you
this will benefit you in life, even in the
hereafter, you will not lose anything…
Juffri Supa’at is a Senior Librarian with the National Library. He curated the exhibition “Sumbangsih MAS” featuring works by literary pioneer, Muhammad Ariff Ahmad. Juffri compiled a selection of Muhammad Ariff Ahmad’s poetry and also put together a comprehensive bibliography of his works.

Writing to Print: The Shifting Roles of Malay Scribes in the 19th Century