Who designed the Kranji War Cemetary? What’s the historic value of a James Bond rip-off? Why was traditional Malay medicine seen as magic? The answers to these questions and more in this issue. 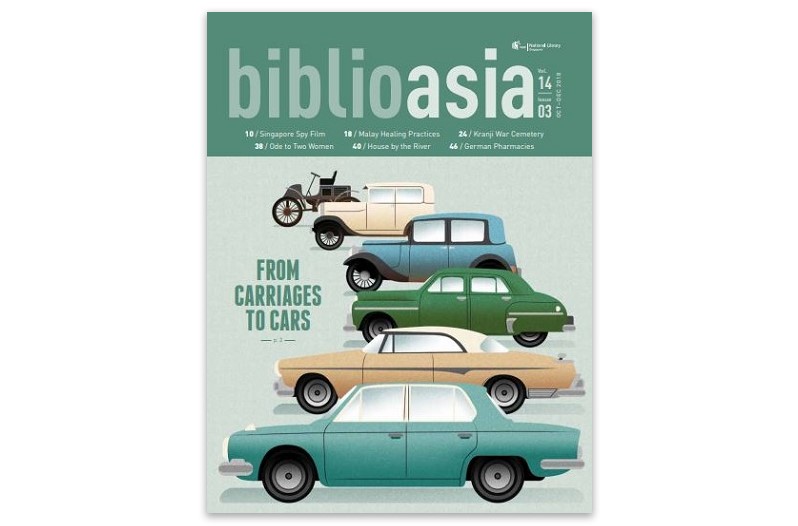 Wheels of Change 1896–1970
Advertisements targeting aspiring car owners have come a long way since the first automobile was launched in Singapore in 1896, as Mazelan Anuar tells us. (PDF)

Five Ashore in Singapore: A European Spy Film
Raphaël Millet sits through a B-grade movie dismissed by critics as belonging to the genre of Eurospy flicks that parody James Bond – and discovers a slice of Singaporean celluloid history. (PDF)

Magic or Medicine: Malay Healing Practices
Is traditional Malay medicine based on superstition and folklore or grounded in scientific evidence? Nadirah Norruddin uncovers the varying perceptions of Malay medicine in colonial Malaya. (PDF)

In Honour of War Heroes: The Legacy of Colin St Clair Oakes
Who was the architect behind Singapore’s Kranji War Cemetery and other similar memorials in South and Southeast Asia? Athanasios Tsakonas has the story. (PDF)

An Ode to Two Women
Acclaimed poet and playwright Robert Yeo pays tribute to his daughter and a noted author in chapter two of his work-in-progress sequel to his memoir Routes. (PDF)

The House of Ripples
Martina Yeo and Yeo Kang Shua piece together historical details of the little-known River House in Clarke Quay and discover that it was once a den for illicit triad activity. (PDF)

Papers from the Past: The Lee Family Archives
The personal papers of a noted Peranakan family provide a window into the lives of the Straits Chinese community during the colonial era, as Ong Eng Chuan reveals. (PDF)