Nadia Ramli traces the history of the Malay art scene in early Singapore through a collection of art-related ephemera, catalogues and publications at the National Library. 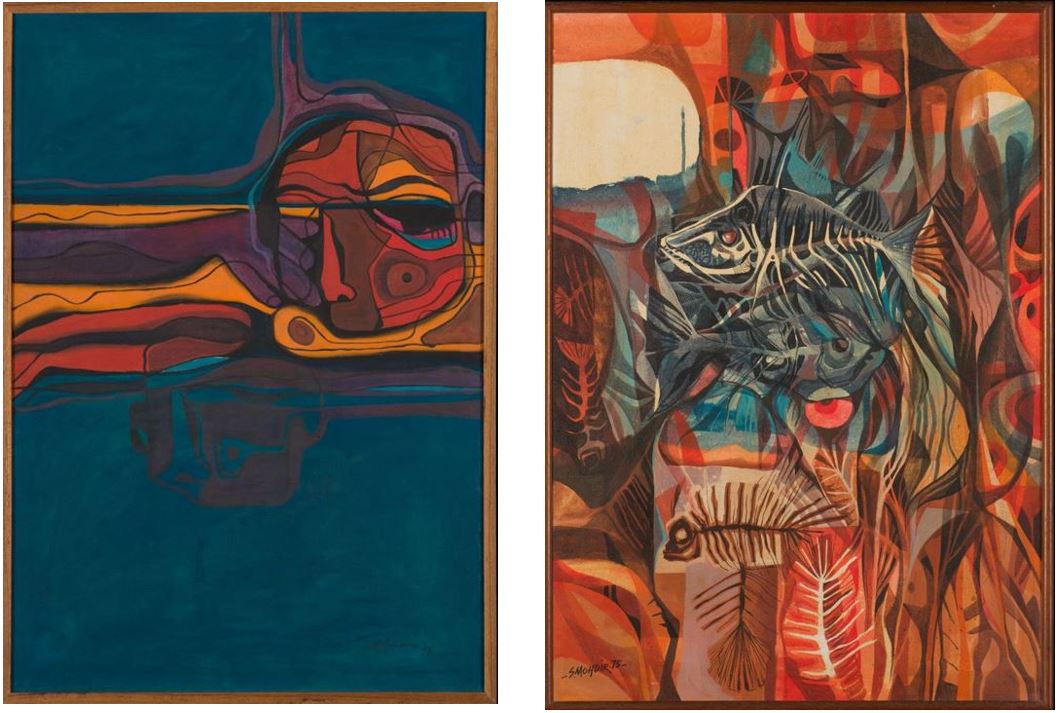 (Left) “The Face in Meditation” (undated) by Abdul Ghani Abdul Hamid, which depicts a mask-like face and contorted limbs, is reminiscent of batik with its bold colours and strong outlines. Courtesy of National Gallery Singapore.
(Right) S. Mohdir’s “Dalam” (1975), which means “deep” in Malay, depicts the unexplored depths of the world beneath the sea. This work has often been cited as an example of an early experimentation in surrealism by a Singaporean artist. Courtesy of National Gallery Singapore.

In April 1948, an art exhibition held at the Y.M.C.A. Singapore was reported in The Morning Tribune as “the first occasion of the Malay Artists of Singapore holding an Exhibition of Art”.1 The event, helmed by the Singapore Malay Art Class, was organised by C. Mahat (Mahat bin Chadang),2 a pioneering Malay artist who had been nurturing budding talent through his art classes since 1947.

In 1949, C. Mahat and another artist, M. Salehuddin, set up the Persekutuan Pelukis Melayu Malaya (PPPM, or the Society of Malay Artists, Malaya).3 This marked the beginning of a collective effort by Malay artists to establish themselves in Singapore’s visual arts scene.

The society held its first show at the British Council Hall in February 1951, showcasing a total of 197 artworks on themes such as Malayan scenery, occupations and events. A Straits Times article, titled “Paintings of Nadra on Show”4, highlighted two oil paintings that depicted Maria Hertogh, the Dutch teenager who sparked a series of racial riots5 in December the previous year. (Hertogh was given the name Nadra upon her conversion to Islam.)

In the 1950s, other art collectives and groups emerged, albeit mostly short-lived. In 1956, the Angkatan Pelukis Muda (Young Artists’ Movement) emerged on the scene, founded by a group of aspiring young artists, but it was unable to garner sufficient support and dissolved soon after.6 Subsequently, in January 1960, a few artists and art enthusiasts came together to form Tunas Pelukis ’60 (Budding Artists ’60), with S. Mahdar as mentor.7 The latter was known back then for the naturalism and realism in his art.8

In April 1961, the art section of Lembaga Tetap Kongres Bahasa dan Kebudayaan Melayu (LTK; Permanent Board of Congress of Malay Language and Culture) staged a major exhibition at the Victoria Memorial Hall. The exhibition featured the works of 34 Malay artists, both experienced as well as amateur artists. The souvenir publication for the event included photographs of selected works, including that of established artists such as C. Mahat, Sulaiman Haji Suhaimi, M. Salehuddin, M. Sawoot, Aman Ahmad, and younger artists like Abdul Ghani Abdul Hamid, S. Mohdir, S. Mahdar and Rohani Ismail.9

The LTK continued to promote art and cultural activities in the following years, with its festivals in 1963 and 1968 providing platforms to exhibit the works of budding artists.10 In its 1968 cultural festival souvenir publication, Abdul Ghani Abdul Hamid wrote that an “exhibition of paintings such as this is one of the many ways of introducing the artist and his works to the public”.11

The call for an art society for Malay artists eventually culminated in the formation of the Angkatan Pelukis Aneka Daya (APAD; Association of Artists of Various Resources) in July 1962. APAD was led by Abdul Ghani Abdul Hamid, Muhammad Ali Sabran, S. Mohdir, Ahmin Haji Noh, Hamidah M. F. Suhaimi and Mustafa Yassin.12 The association became active in organising solo and group exhibitions, and also took part in collaborations with other cultural groups, art societies and art galleries, both in Singapore and the region. APAD continues to exhibit works by Malay artists today, making it one of the few art societies in Singapore that have survived the test of time.

Before formal arts education became widely accessible to the community (the pioneering Baharuddin Vocational Institute was opened only in 1965), classes run by individual artists and art societies provided the only means of learning art outside of schools. Seeing the importance of art education and building a learning community, APAD organised outings to draw or paint as well as overseas study tours to Kelantan, Kuala Lumpur and Malacca, in addition to its series of children’s art classes and programmes aptly named TUNAS (Sprouts). These efforts created an awareness of Malay artists and their works, and also expanded their network within the local and regional art communities.13

In July 1964, APAD launched its formal art classes. Details of the syllabus and curriculum are found in the information booklet Kelas Lukis (Art Class).14 Classes for beginners taught students still life and the use of pencil and charcoal, while more advanced classes included portraiture drawing as well as watercolour and oil painting. The association also conducted classes for art students sitting for their GCE O-Level art examination.

Art education also came by way of books. Two landmark publications – one published in 1949 and the other in 1960 – helped to generate interest in visual arts among the Malay community. The first is C. Mahat’s Petua Melukis (Tips on Drawing).15 Written in Jawi, Petua provides instructions on sketching and painting, with notes and diagrams for the beginner on how to draw perspectives, create shadows and depths, and sketch basic figures and animals.

The second publication is Abdul Ghani Abdul Hamid’s Sa-kilas Pandang Seni Lukis dan Perkembangannya (A Glimpse of the Arts and its Development). Chapters in the book include discussions on Eastern versus Western art as well as the development of the arts among the Malay community in Singapore and the region. Advertisements that appeared in Berita Harian in 1961 and 1966 marketed it as the first Malay-language book to cover an in-depth study of the art scene in Singapore.16

Here is a glimpse of exhibition catalogues and collaterals – published between the 1960s and 90s – from the collection of the National Library.

ABDUL GHANI ABDUL HAMID: THE MAN AND HIS ART

Abdul Ghani Abdul Hamid (1933–2014) was a prolific and award-winning writer, poet and artist. Writing primarily in Malay, he penned hundreds of poems, short stories, essays, newspaper articles and plays in his lifetime. His series of abstract paintings, “Lalang”, were the most famous in his oeuvre.

Abdul Ghani was an active member of the literary and visual arts scenes in Singapore. He was a founding member of Angkatan Pelukis Aneka Daya (APAD; Association of Artists of Various Resources) and served as its president between 1962 and 1983. He was also a member of the National Arts Council from 2000 to 2002 and the recipient of three prestigious literary awards: Anugerah Tan Seri Lanang (1998), Southeast Write Award for Malay Poetry (1998) and the Cultural Medallion (1999).

The Abdul Ghani Abdul Hamid Collection at the National Library comprises letters and literary manuscripts as well as publications and ephemera related to the visual and literary arts. Included in the collection are letters and notes that document Abdul Ghani’s involvement with art associations, exhibitions and various events in Singapore.

Catalogued by subject matter and time period, the collection provides rich insights into the development of the Malay visual arts scene in Singapore. 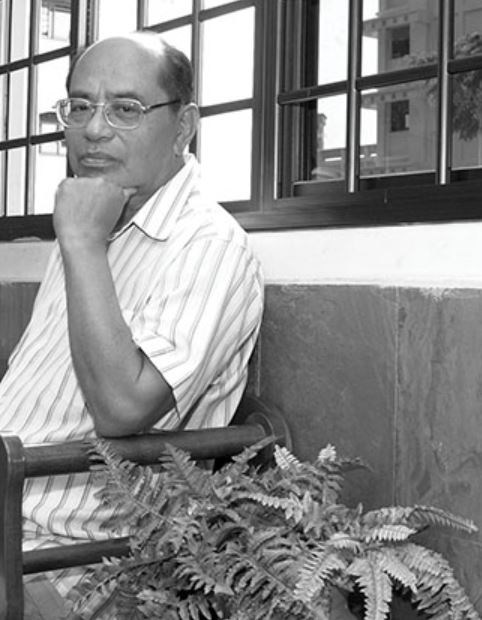 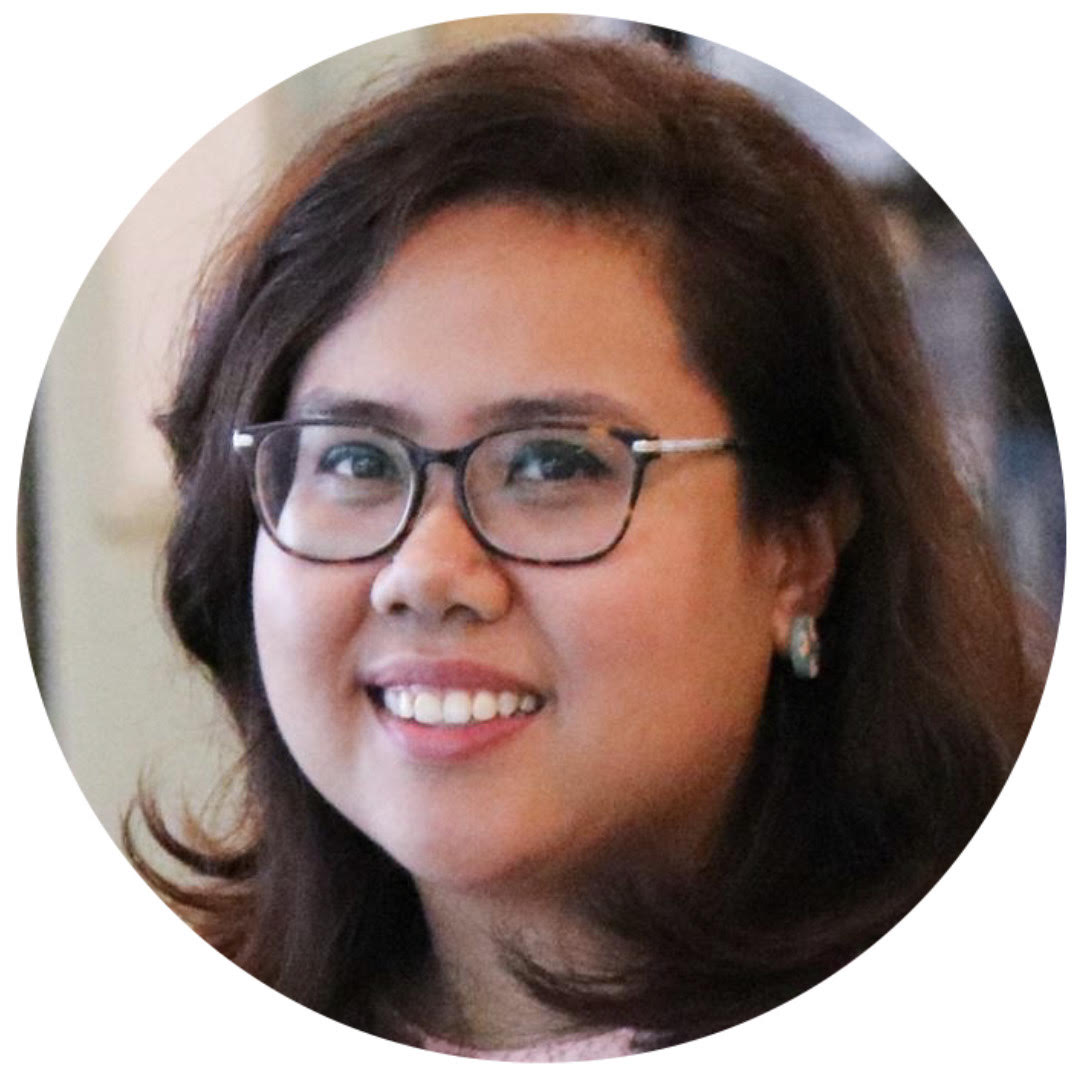 Nadia Arianna Ramli is an Associate Librarian with the National Library, Singapore. She works with the library’s arts collections, with a special focus on literary and visual arts. Her research interests include Singapore literature and theatre studies.
Back to Issue