Farquhar fights back. The daring Mrs Dare. Lessons from the Chetty Melaka kitchen. These and other great reads in this issue of BiblioAsia. 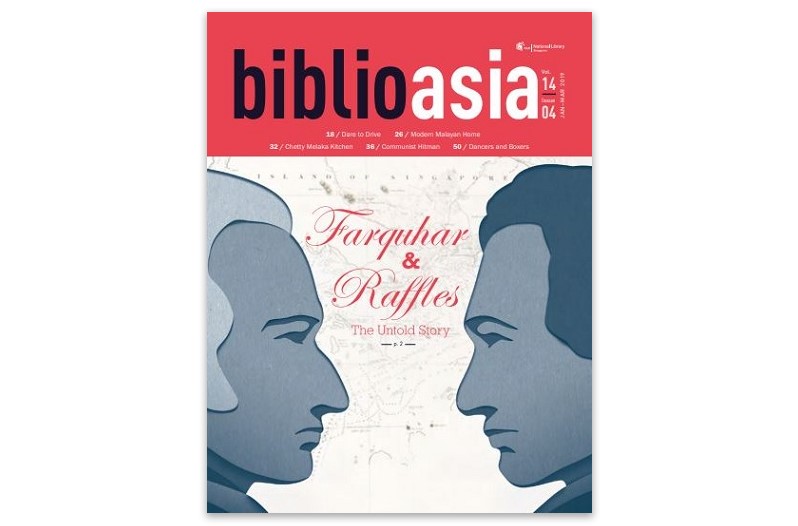 Farquhar and Raffles: The Untold Story
The founding of Singapore in 1819 and its early development have traditionally been attributed to Sir Stamford Raffles. Nadia Wright claims that his role has been exaggerated at the expense of another. (PDF)

Looking Back at 700 Years of Singapore
Singapore’s history didn’t begin in 1819 when Stamford Raffles made footfall on the island. Tan Tai Yong makes sense of our 700-year history in this wide-ranging essay. (PDF)

Mrs Dare and Her Magnificent Driving Machine
The intrepid Mrs G.M. Dare was – true to her name – Singapore’s first woman driver. In April 1907, she embarked on a 686-mile road trip across the Malay Peninsula. (PDF)

The Modern Malayan Home
Along with the introduction of running water and electricity at the turn of the 20th century were advertisements featuring modern home appliances. Georgina Wong has the story. (PDF)

Life Lessons in a Chetty Melaka Kitchen
Thrift, hard work and resilience are qualities that can be nurtured through food. Chantal Sajan recalls the legacy of her grandaunt. (PDF)

Iron Spearhead: The Story of a Communist Hitman
Ronnie Tan and Goh Yu Mei recount the story of a ruthless Malayan Communist Party cadre whose cold-blooded murders caused a sensation in Singapore in the 1950s. (PDF)

Singapore Stopover: The Entertainment Circuit 1920–1940
The city was a major pit stop for visiting entertainers and sportsmen in the early 20th century, according to the writer Paul French. (PDF)

Creative Collectives: Abdul Ghani Hamid and His Contemporaries
Nadia Ramli traces the history of the Malay art scene in early Singapore through a collection of art-related ephemera, catalogues and publications at the National Library. (PDF)

When There Were Farms
Zoe Yeo highlights a selection of publications on farming in Singapore from the National Library’s Legal Deposit Collection. (PDF)