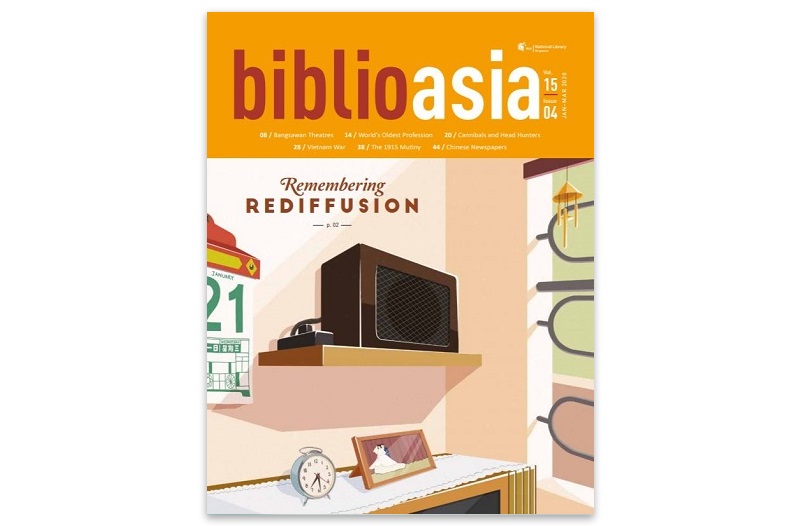 Welcome to the first issue of 2020! The start of any new year always provides us with the opportunity to look forward to what the future holds, and to reflect on our past.

Today, we take it for granted that we can get our fill of entertainment anytime and anywhere we want. We download movies and television programmes onto our phones and tablets, and watch them while lying in bed or riding the MRT.

Things were very different in the immediate post-war years though. In the 1960s and 1970s, many Singaporeans relied on their trusty Rediffusion sets for entertainment. Although Rediffusion only had two channels and limited programming, it was beloved by Singaporeans. Until, that is, it fell out of favour. Barbara Quek looks at the rise and decline of this venerable form of entertainment.

If the idea of a Rediffusion set seems quaint, imagine life in the late 19th and early 20th centuries. Back then, for a night’s entertainment, you would walk or ride on a bullock cart to North Bridge Road to catch a bangsawan show, a stage production performed in Malay by actors and backed by an orchestra. Tan Chui Hua puts bangsawan venues under the spotlight to show us what life was like back then.

Both Rediffusion sets and bangsawan theatres have had their day in the sun. Will newspapers be next to go? Perhaps not. As an industry, newspapers have demonstrated a remarkable ability to adapt, as Lee Meiyu shows in her essay on how Chinese newspapers here have evolved over the last 200 years.

Even as newspapers change to meet new challenges, one thing remains constant: someone needs to gather the news. This can be dangerous work as Shirlene Noordin recounts in her story of four Singaporean journalists who covered the Vietnam War. Sadly, of the four, only one survived.

Armed conflict is the subject of another piece that recounts the final moments of Indian soldiers in Singapore who mutinied in 1915. Umej Bhatia recreates their last hours before they were executed by a firing squad in an excerpt from his newly published book.

Some stories about colonial Singapore are better known than others. Adeline Foo provides a glimpse of a more seedy side of our city, highlighting the lives of women at the turn of the 20th century who were kidnapped or forced by circumstances to become sex workers. Many of these women had little say in how they lived their lives.

In contrast, we feature the intrepid Austrian writer Ida Pfeiffer, who travelled the world alone and stopped over twice in Singapore in the second half of the 19th century. She wrote about the wonders of Pulau Ubin, described a Chinese funeral in detail and came up close to drying human heads in Sarawak. John van Wyhe has the story.

We round off this issue with Ang Seow Leng’s piece on census-taking in Singapore, Gracie Lee’s article on the history of printing in Indochina and Wong Sher Maine’s retrospective on 150 years of the Istana.