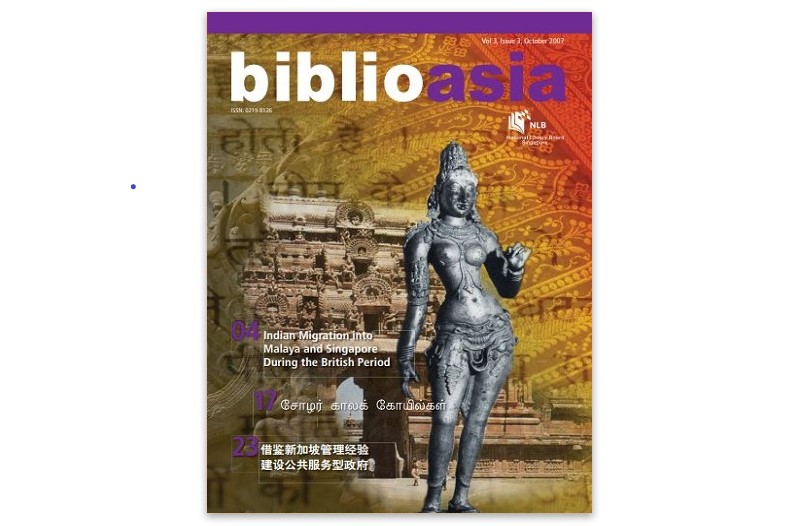 Indian Migration into Malaya and Singapore During the British Period
Hailing from the Indian subcontinent – which comprises India, Pakistan, Bangladesh, Sri Lanka, Nepal, Bhutan and the Maldives – Indians have played an important role in the historical, economic, cultural and political development of Singapore. (PDF)

A Historical Review of the Pre-war Chinese Curriculum and Textbooks Used in Singapore: Pages from a Community in Transition
Studies on the education of overseas Chinese communities have often been carried out within the framework of examining the education policies and politics of China and that of the local governments. By examining other local events and factors, a more exact picture of the Chinese modern education in Singapore could be discerned. (PDF)

சோழர் காலக் கோயில்கள்
For nearly 400 years, the Cholas were the dominant cultural, religious and political force in South India and beyond. The arts such as music, poetry, drama and architecture reached new heights during the four centuries of Chola rule. Many temples were built, and an example of fine Chola architecture is the Tanjore Temple built in 1010. (PDF)

ஆகப்பழைய தமிழ் நூல் – முனாஜாத்து திரட்டு
Munajaathu Thirattu, published in Singapore in 1872, is the oldest Tamil book at the National Library. The book is a collection of poems in praise of Muslim saints and the Prophet Muhammad. (PDF)