Opium-smoking, gambling, prostitution and triad activities were common in Singapore in the 19th and early 20th centuries. In this issue, we examine the seedy side of Singapore’s past through the lens of “Crime, Vice & Punishment”. 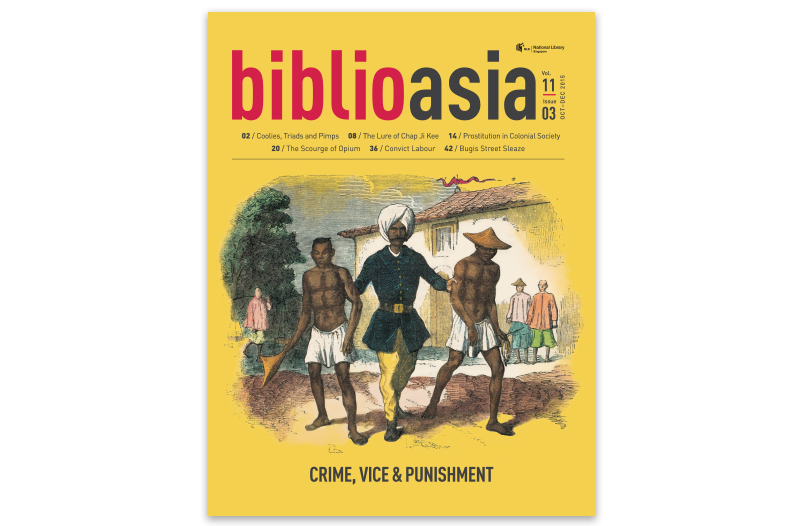 Coolies, Triads and Pimps: Chinatown in Former Times
The Chinatown of yesteryear was a thriving hotbed of crime and secret societies. Lim Tin Seng unveils its less glamorous history. (PDF)

Money-making Bodies: Prostitution in Colonial Southeast Asia
The oldest profession in the world took on a different complexion in Southeast Asia when the European colonial powers arrived. Farish Noor puts the pieces together. (PDF)

Chasing the Dragon: The Scourge of Opium
The opium trade was a lucrative business in colonial Singapore. Gracie Lee examines its deleterious effects on the economic and social life of the city. (PDF)

Di Balik Pintu: Seksualiti di dalam Sastera Melayu
Juffri Bin Supa’at examines the controversial topic of sex and sexuality in Malay literature and how these subjects are represented in both traditional and modern literary texts.(PDF)

Convict Labour in Colonial Singapore
Singapore was once a penal colony for convicts shipped in from overseas. Bonny Tan documents how their humble service raised some of Singapore’s famous buildings. (PDF)

Bugis Street: From Sleazy to Sanitised
The spruced up Bugis Street of today is a far cry from the days when it was a bump-and-grind fleshpot. Lee Meiyu chronicles its chequered history. (PDF)

Wartime Propaganda: The Battle for Minds and Hearts
Benjamin Seet shares highlights from his collection of World War II leaflets air-dropped by Allied Forces over Japanese-occupied Southeast Asia between 1942 and 45. (PDF)

The Circus Comes to Town
The story of a homegrown circus finds expression in a new book called Life Beyond the Big Top: Stories of the Tai Thean Kew Circus, by Adele Wong. (PDF)

Pay It Forward: The Tamil Digital Heritage Project
Chitra Sankaran charts the history of a community-driven project that has seen the digitisation of 350 homegrown Tamil literary works. (PDF)