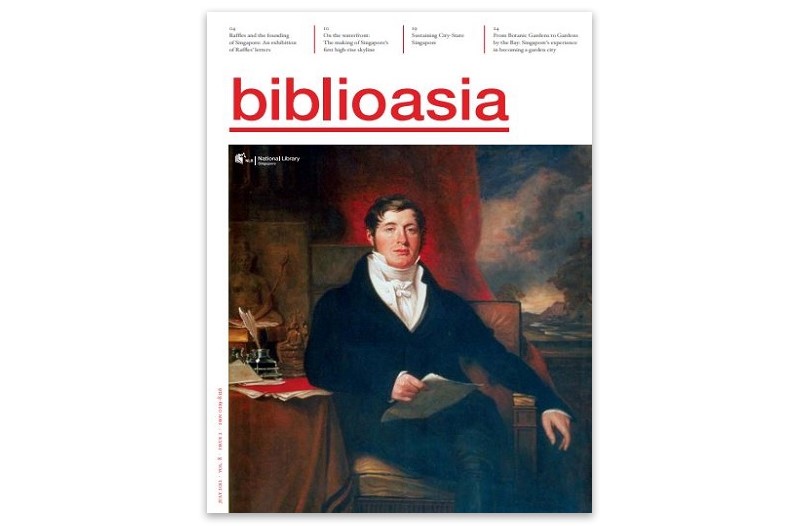 Raffles and the Founding of Singapore: An Exhibition of Raffles’ Letters from the Bute Archive and the National Library
Nearly 200 years after he set foot on Singapore to establish a trading post for the British East India Company, Sir Thomas Stamford Bingley Raffles (1781–1826) continues to fascinate and intrigue us. How else can you explain our penchant for naming all manners of things after him?(PDF)

On the Waterfront: The Making of Singapore’s First High-rise Skyline, 1918–1928
The town of Singapore and its architecture had always attracted attention. Even in the earliest days of the Settlement, visitors regularly commented on the fine buildings along the Esplanade, the neat and orderly streets and tree-lined thoroughfares, and the grand colonial-style residences of the European and Asian elites. From the outset, the progress of the town and its architectural landmarks were seen, quite rightly, as a reflection of the colony’s prosperity.(PDF)

From Botanic Gardens to Gardens by the Bay: Singapore’s Experience in Becoming a Garden City
Gardens by the Bay is Singapore’s spectacular new landmark. The 101-hectare garden is marked by two 38-metre-tall glass domes and 18 gigantic concrete-and-steel vertical gardens or Supertrees, each measuring between 25m and 50m in height.(PDF)

Tiong Bahru: Exploring Singapore’s First Public Housing Estate
Tiong Bahru is a place of many faces. Originally known for its “aeroplane houses”, Singapore’s first public housing experiment once has a reputation as a haven for the mistresses of rich businessmen. These days, it is better known for its heritage housing, skyrocketing property prices and popular food establishments.(PDF)

Menyingkap Kenangan Kampung Pasiran dan Sekitarannya
Traces the historical development of a village in Singapore called Kampung Pasiran and its surrounding areas using primary source materials from the National Archives of Singapore as well as interviews with surviving kampong dwellers.(PDF)

“Rich and Strange”: The Manifold Remakings of English in Southeast Asian Literatures
An Anthology of English Writing from Southeast Asia is a substantive achievement and its editors are to be congratulated. All four are academics – Philip Holden and Rajeev S. Patke are from the National University of Singapore, while Isabela Banzon and Lily Rose Tope are from the University of the Philippines.(PDF)