The genius of Tan Swie Hian, the building of Pearl Bank Apartments, and the design of the Sri Mariamman Temple are some of the things we focus on in this special issue. 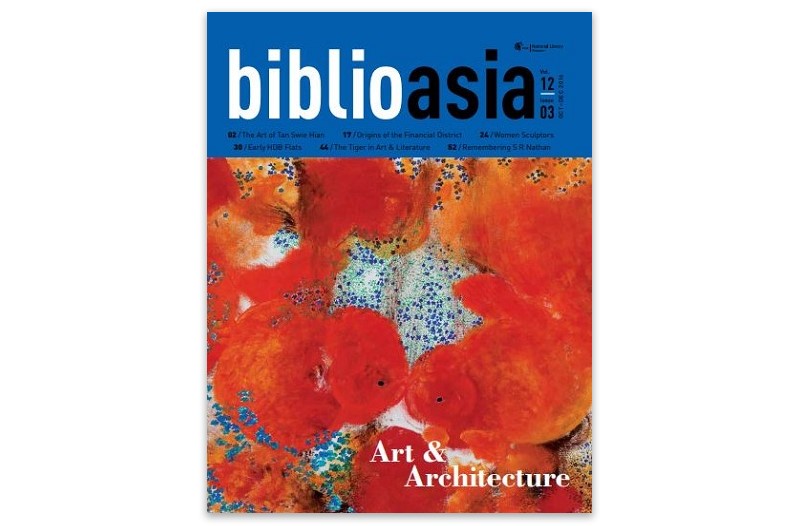 悲悯人生: 陈瑞献的文艺创作
Tan Swie Hian, whose paintings have fetched record prices, was in fact better known for his literary prowess when he first emerged in the arts scene. Jessie Yak highlights some of his poems, short stories and fables. (PDF)

As Good As Gold: The Making of a Financial Centre
Singapore’s Central Business District didn’t happen by accident. Lim Tin Seng recounts how a piece of prime land dubbed as “Golden Shoe” was transformed into a glittering financial hub. (PDF)

Soft Hands But Steely Hearts: Women and Their Art
A coterie of women sculptors in Singapore has successfully redefined this once male-dominated art form. Nadia Arianna Bte Ramli tells us more. (PDF)

Public Housing, Private Lives
Incredibly, people living in some of the first one-room flats had to share their toilets and kitchens with strangers. Yu-Mei Balasingamchow tells you how far public housing has come since 1960. (PDF)

The Padang: Centrepiece of Colonial Design
This expanse of green, fringed by grand colonial edifices in the city centre, is a statement of British might as Lai Chee Kien tells us. (PDF)

The Tiger Within
These fanged beasts are by turns both captivating as they are terrifying. Patricia Bjaaland Welch explores the tiger motif in the art and literature of Asia. (PDF)

Law of the Land
A permanent exhibition on Singapore’s constitutional history – from its founding in 1819 to Independence in 1965 – opens at the National Gallery Singapore. Kevin Khoo details some of its highlights. (PDF)