It’s a bird! It’s a plane! It’s a history of the comics in Singapore in this issue’s cover story! 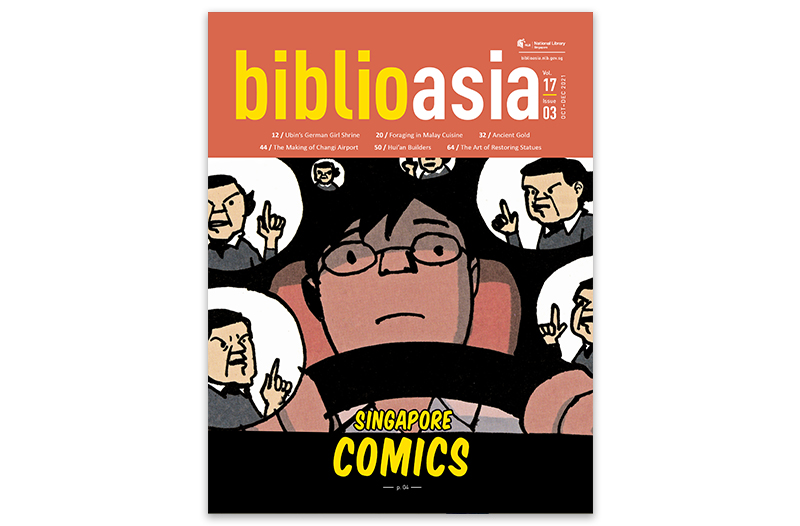 Singapore Comics: Panels Past and Present
Singapore has its own comic superheroes too, as Jacqueline Lee and Chiang Yu Xiang discover. (PDF)

Unravelling the Mystery of Ubin’s German Girl Shrine
William L. Gibson makes many trips to Pulau Ubin to uncover the origin of the mysterious shrine. (PDF)

The Role of Foraging in Malay Cuisine
Foraging for food has been carried out by the Malays for centuries, as Khir Johari tells us. (PDF)

Ancient Gold in Southeast Asia
Where did ancient gold come from? What gold discoveries have been made here? Foo Shu Tieng has the answers. (PDF)

How Changi Airport Came To Be
Rebecca Tan uncovers fascinating facts behind the decision to build the airport and how it eventually took shape. (PDF)

Carving Cultural Imprints: The Hui’an in Singapore
A group of contractors from Hui’an county in China were responsible for building some of Singapore’s iconic landmarks. Athanasios Tsakonas has the story. (PDF)

Making the Invisible Visible: Restoring the Statues of St Joseph’s Church on Victoria Street
Alvin Tan documents the painstaking process behind the restoration of almost 30 statues in the church. (PDF)