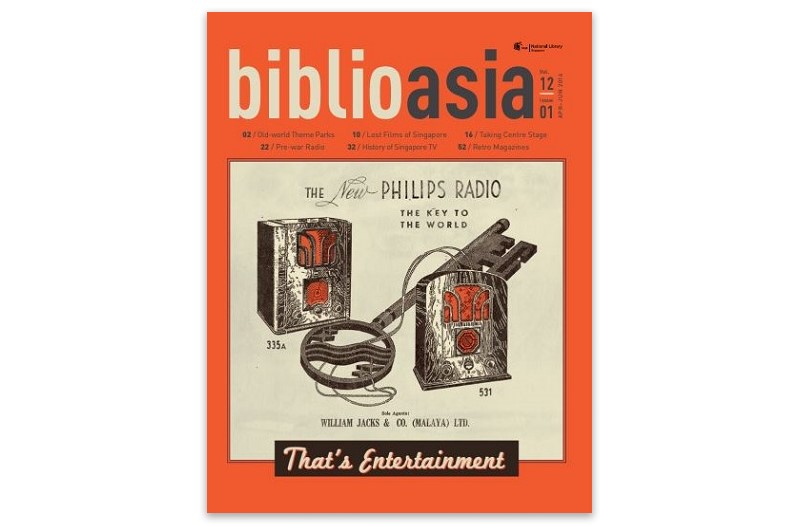 In this special issue, we turn the spotlight on how we used to be entertained, from thronging amusement parks like New World and Great World, to watching iconic single-person plays like Emily of Emerald Hill, and listening to the radio.

Old-World Amusement Parks
Theme parks in Singapore had their heyday from the 1920s to 50s. Lim Tin Seng charts their glory days and subsequent decline. (PDF)

Gaston Méliès and his Lost Films of Singapore
Gaston Méliès may be the first filmmaker to have directed fiction films in Singapore. Unfortunately, none have survived the ravages of time. Raphaël Millet tells us why. (PDF)

One Small Voice: The Monodrama in Singapore Theatre
Emily of Emerald Hill is one of Singapore’s most iconic single-person plays. Corrie Tan tells us more about the history of the monodrama on the Singapore stage. (PDF)

The Story of Singapore Radio, 1924–41
The advent of wireless broadcasting created the same ripples that the Internet unleashed in more recent times. Chua Ai Lin traces its development in colonial Singapore. (PDF)

Seni Persembahan Bangsawan
Juffri bin Supa’at traces the historical development of bangsawan in Singapore and showcases some of the more famous bangsawan troupes that have made an impact since the art form was introduced in Singapore in 1880. (PDF)

Singapore TV: From Local to Global
Lau Joon-Nie charts the rise of Singaporean television from the first test transmissions to the advent of foreign competition posed by the arrival of cable. (PDF)

In Remembrance of Reading
Our memories of reading are inextricably linked to the joy we derive from reading books and the places where we read them. Loh Chin Ee explains why. (PDF)

Cover to Cover
Barbara Quek and Zoe Yeo highlight entertainment magazine covers of yesteryear from the collections of the National Library. (PDF)

The George Hicks Collection
This valuable collection at the National Library is significant for a number of reasons. Eunice Low explains why. (PDF)

The Bastin Collection on Raffles
The National Library recently acquired a treasured collection of letters and books of Sir Stamford Raffles. J. B. Stanley describes some of the highlights. (PDF)