In this issue, our highlights include cabaret girls with a heart of gold, stained glass windows, and the 75th anniversary of the fall of Singapore. 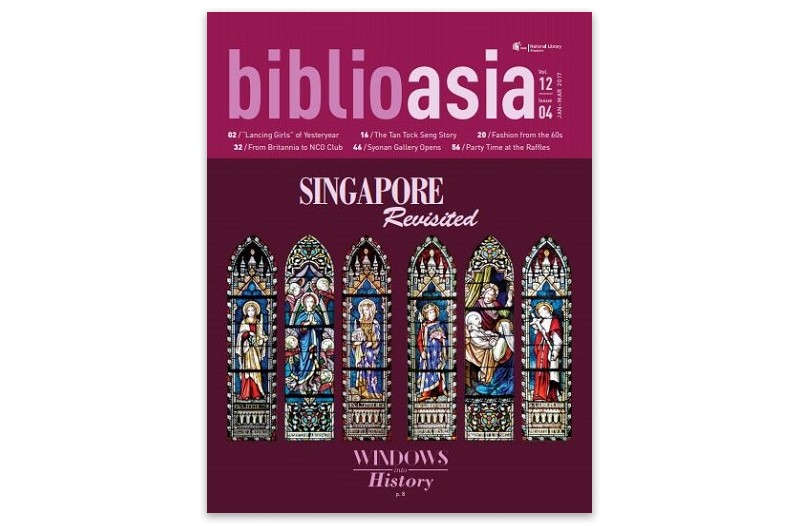 Beneath the Glitz and Glamour: The Untold Story of the “Lancing” Girls
These cabaret girls were better known for their risqué stage shows, but some also donated generously to charity. Adeline Foo uncovers these women with hearts of gold. (PDF)

From Pauper to Philanthropist: The Tan Tock Seng Story
Sue-Ann Chia traces the classic rags-to-riches story of a vegetable seller turned land speculator who left a hospital named after him in Singapore. (PDF)

1960s Fashion: The Legacy of Made-to-Measure
The changing face of fashion in Singapore is the subject of a new book called Fashion Most Wanted. This extract recalls how the advent of TV impacted new fashion trends in the 1960s. (PDF)

From Britannia to the NCO Club
The much-loved NCO Club on Beach Road was a favourite downtown R & R spot for off-duty soldiers. Francis Dorai charts its history. (PDF)

Ties that Bind: The Story of Two Brother Poets
An American Studies scholar unravels a decades-old mystery surrounding a bone fragment and uncovers a brotherly bond from beyond the grave. Michelle Heng has the story. (PDF)

The Sook Ching
February 15 marks the 75th anniversary of the fall of Singapore. Goh Sin Tub recounts the horrors that many Chinese suffered at the hands of the Japanese in this short story. (PDF)

Surviving the Japanese Occupation: War and Its Legacies
A revamped exhibition space opens at the old Ford Factory in Bukit Timah, marking the 75th anniversary of the fall of Singapore. Fiona Tan details its major highlights. (PDF)

哎哟华文字真难写!
Students in pre-1970s Singapore had to learn the correct way of writing the Chinese script. Ho Phang Phow describes the painstaking process of mastering this craft. (PDF)

Party Time at the Raffles
The National Library’s collection of menu cards from Raffles Hotel provides an inkling of lavish parties and fine dining from bygone days. Francis Dorai and Jessie Yak take a peek. (PDF)

Script & Stage: Theatre in Singapore from the 50s to 80s
A new exhibition on Singapore theatre traces its growth from its nascent days in the 1950s when traditional art forms were dominant, as Georgina Wong explains. (PDF)