Since time immemorial, maps have been used as tools to explore the world and conquer new territories. This issue’s cover story showcases a number of Asian maps from the National Library’s latest exhibition. 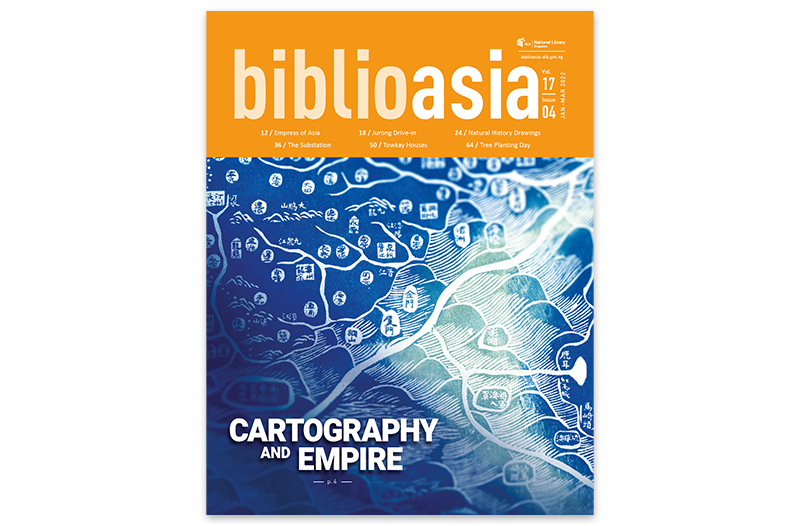 Cartography and the Rise of Colonial Empires in Asia
A new exhibition on Asian maps opens at the National Library Building. Chia Jie Lin shares highlights from the exhibition. (PDF)

The Final Hours of the Empress of Asia
Dan Black recounts the final hours of this troopshipas she sank near Sultan Shoal Lighthouse off Tuas in February 1942. (PDF)

Movies Beneath a Starry, Starry Night
In the 1970s, Jurong Drive-in Cinema drew in the crowds, at least while the novelty lasted. Sharon Teng reminisces its glory days. (PDF)

In Their Own Words: The Early Years of The Substation
People involved in The Substation’s genesis and early years tell Clarissa Oon what it was like in the beginning. (PDF)

Wong Din Haan: A Pioneer Educator
This trailblazer founded a girls’ school in Singapore and was also a firm believer of women’s rights. Patricia Lim remembers her grandaunt’s legacy. (PDF)

Towkays at Home
Mandalay Villa, House of Jade and House of Teo Hoo Lye were owned by prominent members of the Singapore community in the early 20th century. Yap Jo Lin takes us on a whirlwind tour. (PDF)

Siti Radhiah’s Cookbooks for the Modern Malay Woman
Toffa Abdul Wahed pores through Siti Radhiah’s cookbooks published in the 1940s and 50s to uncover their contributions to traditional Malay gastronomy and identity. (PDF)