A new type of paper produced in the 1920s did not take off despite attempts to promote it. In this cover story, read about rubber latex paper, which was more durable, had greater tensile strength and was resistant to folding. 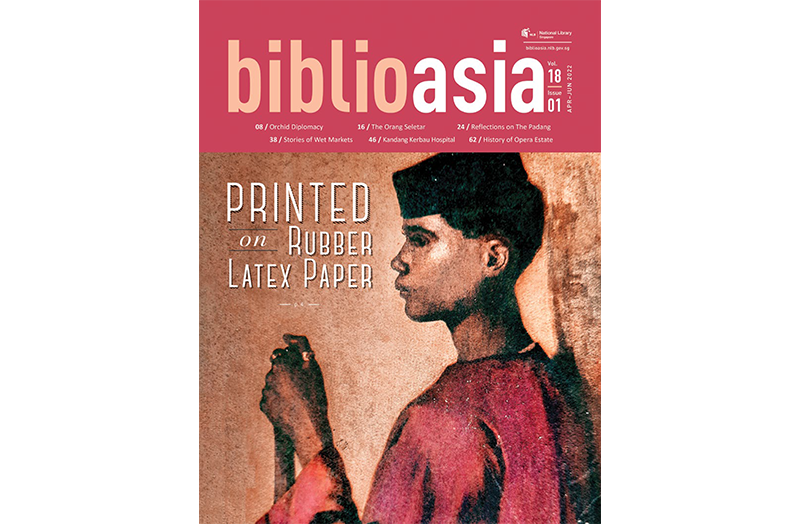 Printed on Rubber Latex Paper
An innovation patented in 1920 produced paper that was more durable, had greater tensile strength and was resistant to folding. Alex Teoh has the details.

The Orang Seletar: Rowing Across Changing Tides
Singapore was once a home to the seafaring Orang Seletar who now reside in Johor Bahru. Ilya Katrinnada takes them on a tour around Singapore.

A History of the Padang
A 4.3-hectare patch of green stands in front of the former City Hall building. Kevin Tan tells us why it is so special.

The Kamala Club: Planting the Seeds of a Pioneering Women’s Organisation
Vandana Aggarwal traces the origins of a venerable association for Indian women and the role it played in their lives.

No Longer “Dirty, Unhygienic, Crowded and Messy”: The Story of Singapore’s Changing Wet Markets
The earliest wet markets in Singapore date back to at least 1825. Zoe Yeo tells us how they have changed since.

Cinema Pioneer Tan Cheng Kee
Barbara Quek looks at the man behind the former Alhambra and Marlborough theatres, which were once landmarks on Beach Road.

We Are What We Eat: The Evolution of Chinese Food in Singapore
Chinese food in Singapore is a product of the country’s history and geography, reveals Low Sze Wee.

Living in Harmony: The History of Opera Estate
Opera Estate was once a coconut and rubber plantation. Asrina Tanuri traces its history.