The link between visual art and the written word in the work of Georgette Chen, the beginnings of contemporary art in Singapore and the exciting story of the Wilkes Expedition are explored in this issue. 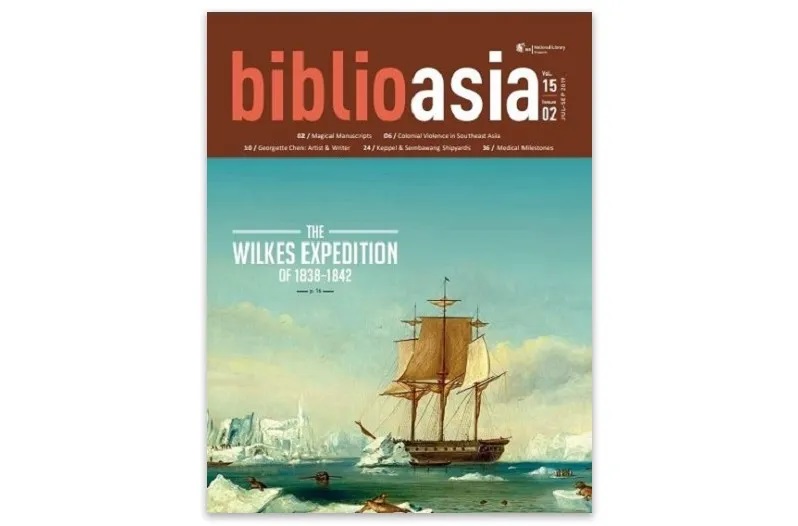 On Writers and Their Manuscripts
No great work of literature is completed in just one draft. In an age where writers have gone paperless, novelist Meira Chand ponders over the value of manuscripts, and what they might reveal about a writer’s thought process. (PDF)

Don’t Mention the Corpses: The Erasure of Violence in Colonial Writings on Southeast Asia
History may be written by the victors, but what they conveniently leave out can be more telling. Farish Noor reminds us of the violent side of colonial conquest. (PDF)

U.S. EX. EX.: An Expedition for the Ages
The Wilkes Expedition – as it is popularly known – vastly expanded the borders of scientific learning. Vidya Schalk explains how this historic American naval mission between 1838 and 1842 is linked to Singapore. (PDF)

Groundbreaking: The Beginnings of Contemporary Art in Singapore
The year 1988 has been held as the watershed year in which contemporary art in Singapore took root with the establishment of The Artists Village. Jeffrey Say debunks this view, asserting that the art movement began earlier. (PDF)

Doctor, Doctor!: Singapore’s Medical Services
Milestones in Singapore’s medical scene – among other subjects – are captured through fascinating oral history narratives in a new book written by Cheong Suk-Wai and published by the National Archives of Singapore. (PDF)

To Wreck or to Recreate: Giving New Life to Singapore’s Built Heritage
Nearly 70 years have passed since a committee was set up to look into the preservation of buildings and sites with historic value. Lim Tin Seng charts the journey. (PDF)

From the Archives: The Work of Photographer K.F. Wong
K.F. Wong shot to international fame with his images of Borneo, though not without controversy, Zhuang Wubin examines Wong’s work and sees beyond its historical value. (PDF)

“I Hasten to Beg Your Indulgence…”: When Declassifying Can Also Mean Decoding
When the National Archives embarked on the declassification initiative to unlock documents previously labelled as “secret” and “confidential” for public access, it also had to decipher what was actually written say K. U. Menon. (PDF)

Oriental Emporium: The End of an Era
The Emporium chain of department stores entered the scene when the retail market in Singapore was still in its infancy. Kam Kit Geok takes a closer look at a much-loved shopping icon. (PDF)